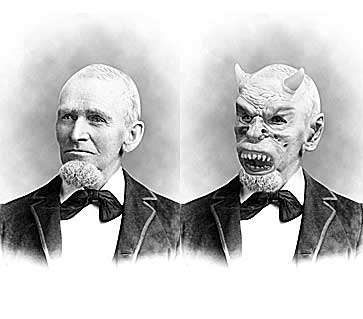 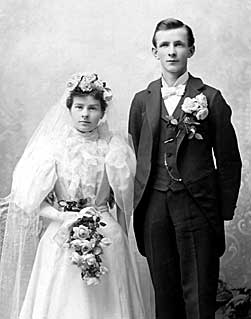 They say the scales of justice can be tipped with a good lawyer and Bruce Beelze was the best. If Bruce couldn't get you off the hook no one could. Bruce had the sterling distinction of being undefeated in front of a jury. But as with most things in life you get what you pay for and Bruce didn't come cheap. When you signed on the dotted line the ink was always red.

Welcome the newest inductee into our Haunted Gallery Bruce Beelze

For those that like dramatic changes, they don't get much more dramatic then Bruce. Bruce marks a first for HauntedPortraits, by combining photos an actual sculpture with my photo manipulations. I saw photos that Monte Ward had posted of a sculpture he was working on for an upcoming mask. I immediately contacted Monte and explained my idea. I found an antique photo to start with and had Monte photograph his sculpture from a similar angle. I them started pushing pixels until Bruce became a reality. Bruce actually contains 3 stages for a smooth transition during which you can actually see the horns grow out of his head. You can see more of the incredible art of Monte Ward at his site www.masksandmonsters.com
To see Bruce's page you can visit him here www.hauntedportraits.com/bruce.htm

In this issue of Smoke and Mirrors I will share the steps I used to create Rose. Everyone probably knows I'm a huge fan of the Haunted Mansion. For me, what sets The Haunted Mansion apart from other haunted attractions is the amount of detail. You can go on it a dozen times and see something that you hadn't seen before. I try and do a little of the same in my work. There are subtle details that sweat over because as they say "The Devil is in The Details"

The first step shows the modifications I made to the brides face. I added dark circles, enlarged the eyes to create a crazed look and exaggerated the laugh lines. I also repeated the same steps in the grooms face.

Here I have removed the outer roses so they don't show behind the head. I've also added a shadow as the head would obviously cast a shadow.

Here I've added the blood. I started by creating some random marks and the ran it through a filter I have to "Melt" those dots which created very realistic drips.

In this detail the head has been placed. There actually is quite a bit of work that went into the head. Starting with another portrait of a man I created the jagged neckline and added some blood. I modified his face by semi-closing his eyes and opening the mouth to give the expressionless look you would expect. I added additional shadowing to the right side of his face to blend it with the illumination of the scene.

Next I worked on the grooms arm. Since the arm moves it reveals part of the backdrop which doesn't exist in the original photo. I've wiped out the original arm and recreated backdrop where there was none.

There are a lot of things you can realistically create from scratch in Photoshop, but an arm holding a knife is not one of them. Here I posed holding one of our kitchen knifes to create the missing piece.

That piece was then added. I smeared blood on the knife and added a drip of blood to the end. Again this is one of those little details most people will never see. 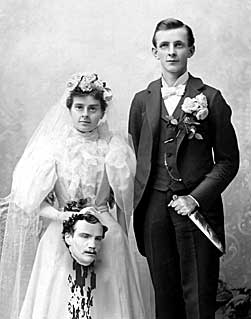 If you would like see Rose's page you can find it here
www.hauntedportraits.com/rose.htm 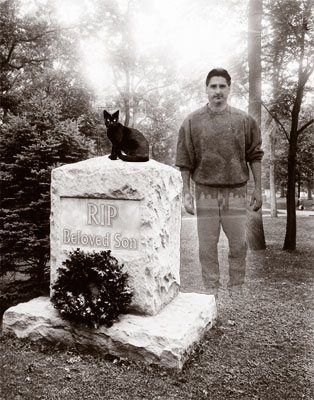 You know you want one, you keep saying you are going to get one. Well time is quickly running out to get yours before Halloween. As we get closer to Halloween my available time to do these custom works will fill up, so act now before you miss out. Ghost portraits are a truly unique piece of art. Know someone that loves the unusual? Then give them a gift that is truly incomparable. Here are a few words from one of my happy customers.

Norm,
I just received my custom Ghost Portrait and all I can say is it is AWESOME!! I can't believe what a great job you did on it and it looks even better than I had anticipated it would. I can't wait to see everyone's reaction the first time they pass by it. Thank you for the excellent job you did. I know my son will give it a prominate place in his home. It will be the highlight of his Halloween party!

Are They Really Haunted?

Tomball Lutheran Cemetery is a real cemetery just a short funeral march from my front door. Now if that wasn't perfect enough for a business named Haunted Portraits then how about the fact that some say it really is haunted.

In this article in The Houston Chronicle Ghost hunter Cathi Bunn says they are and she has the videos and audio to prove it. Cathi is one of Houston's most high profile ghost hunters. Armed with a digital camera, digital camcorder with infrared night vision, a digital voice recorder, a laser temperature meter, an electromagnetic field meter and a flashlight she scours Houston's historic areas in search of ghost. On the night she visited Tomball Lutheran Cemetery with her other ghost hunting buddies she addressed the spirits in hope that they would answer. She asked" Is there anyone out there that can hear us." Complete silence. She then asked "Would you like to tell us your name" A faint cracking noise can be heard and then out of the silence "Mike". She said when she heard it it freaked her out. She had never heard or recorded such a clear response. Cathi also has videos filmed that night with objects clearly moving in front of the camera. So if you ever have something strange happen with your Haunted Portrait, just maybe it came with a little extra something :-)

Making lenticular art is as much art as it is science and unfortunately they don't all turn out perfect, and I'm very picky. I have a stack of seconds as do my competitors. A positive that competition has brought is that my competitors are selling their seconds at a greatly reduced prices which is great for all. With that being said I don't feel right charging people unless it's perfect and I certainly would hate to just throw them away. So if you run a nonprofit Haunt (an IRS 501 3C nonprofit organization) then I will just give you some seconds. Send your info to norm@hauntedportraits.com. Please keep in mind that they all have some sort of flaw and don't meet my usual standards, scratches or just out right experiments so if people ask where you got them tell them that's HauntedPortraits rejects, you should see the good ones :-). Also please understand that I have a limited number of these so they will be given out on a first come first serve basis. If I run out I'll add you to my list and you never know when you might get a surprise in the mail.

I love eBay. It's the source for most of the antique photos I use to create HauntedPortraits and I've been a member since 1998. I also sell on eBay. If you'd like an easy way to find out what goodies I have for sale on eBay, simply click on the logo above and add me to your favorite sellers.

I want you to be completely thrilled with your purchase. I believe in my quality so much that if for any reason you're not thrilled, let me know within 7 days and I will refund your money and I'll even cover the return postage. I will do what ever it takes to keep my customers happy.

If you can not view this newsletter, click here